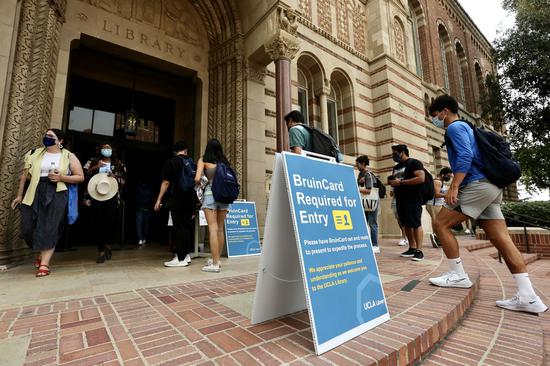 Students are seen at the entrance of the Library on campus of the University of California, Los Angeles (UCLA), in Los Angeles, the United States, Sept. 23, 2021. (Xinhua)

The Chinese embassy in the United States on Wednesday deplored the recent wanton repatriation of a Chinese student by the U.S. law enforcement at Houston airport and urged Washington to stop infringing upon Chinese students' legitimate rights at the excuse of national security.

"The U.S. action seriously infringed upon the legitimate rights and interests of the student, and caused serious physical and mental damage to him and his family. The Chinese side deplores and firmly opposes this action, and has lodged solemn representation with the U.S. side," said a spokesperson of the Chinese embassy.

According to the spokesperson, recently, a Chinese student with a legal visa issued by the U.S. government was wantonly interrogated by the U.S. side at the border entrance at Houston airport. After being confined in a small room for more than 50 hours without proper food and rest, he was deported by the U.S. side through a third country on trumped-up grounds.

For a period of time, the United States has been obstructing educational, cultural and people-to-people exchanges with China. There have been a number of similar cases of arbitrary and harsh interrogation and even deportation of Chinese students by the U.S. law enforcement, which has seriously violated the students' human rights, said the spokesperson.

"What the U.S. side has been doing has gravely undermined normal people-to-people exchanges and educational cooperation between the two countries. It runs counter to the openness and freedom the U.S. loves to tout and the global trend of talent exchanges, and goes against the common aspiration of the two peoples for friendly exchanges," the spokesperson said.

"It is supported by none, and serves the good of none. The Chinese side has expressed firm and strong opposition to the U.S. side on every case immediately after it happened," the spokesperson said.

The spokesperson stressed people-to-people exchanges are the social foundation of China-U.S. relations. Chinese students in the United States play a positive role in promoting mutual understanding and friendship between the two countries.

"Educational and cultural cooperation serves the interests of both sides. We urge the U.S. side to honor its statement of welcoming Chinese students, immediately stop abusing the excuse of national security, stop repatriating, harassing and interrogating Chinese students, and stop infringing upon the legitimate rights and interests of Chinese citizens," the spokesperson said.

"We urge the U.S. side to ensure that such incidents do not happen again, so as to create a good atmosphere for our people-to-people and educational exchanges. The Chinese side will continue to support Chinese students in safeguarding their legitimate rights and interests in accordance with law, and also reminds the students to raise their awareness of safety and guard against similar incidents," the spokesperson added.

LINE
Media partners: People's Daily | Xinhua | CGTN | China Daily
Back to top About Us | Jobs | Contact Us | Privacy Policy
Copyright ©1999-2021 Chinanews.com. All rights reserved.
Reproduction in whole or in part without permission is prohibited.
[網上傳播視聽節目許可證（0106168)] [京ICP證040655號]
[